The LCoS microdevice puts the liquid crystal layer between a transparent thin-film transistor (TFT) and a silicon semiconductor, instead of putting liquid crystal between two polarized panels like an LCD. This semiconductor has a distorted surface that reflects light. The light emitted by the bulb is projected onto the micro-device through a polarizing filter, and the liquid crystal acts like a door or valve to control the amount of light reaching the reflecting surface. The higher the voltage received by the crystal of a particular pixel, the more light the crystal allows to pass through. Several layers of different materials are required to complete the entire process. 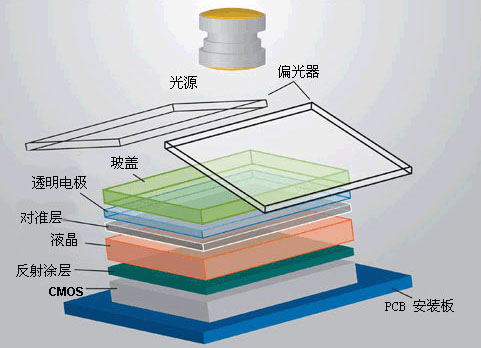 The components and functions of LCoS micro-devices are described below from bottom to top:

Printed circuit board (PCB): transmits commands and current from the TV to the micro device silicon (chip or sensor): uses data from the TV pixel driver to control the liquid crystal, usually using a transistor reflective coating for each pixel: Reflect the light to produce the picture liquid crystal: control the amount of light reaching or leaving the reflective coating. Alignment layer: enable the liquid crystal to be properly aligned, so as to accurately calibrate the light. Transparent electrode: together with silicon and liquid crystal to form a complete circuit cover Protect and seal the entire system 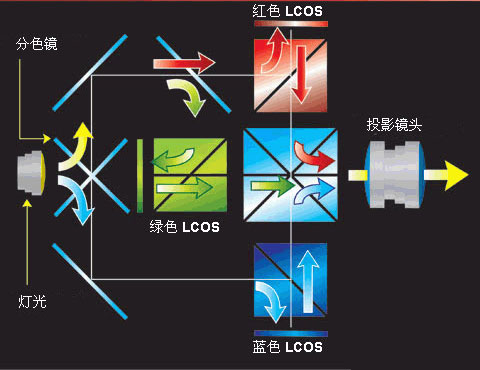 In general, there are only very small gaps between pixels in LCoS devices. The pixel pitch-the horizontal distance between two pixels of the same color-is 8 to 20 microns (10-6). This can reduce or eliminate the "screen door" effect that appears on some DLP TV sets, thereby helping to keep the image smooth and uniform.

The LCOS optical engine is currently dominated by a three-piece type. The three-piece type divides the light source into red, blue, and green light through a beam splitter prism, and then separately projects the light beam into three LCOS panels to project the three-color image. After the optical system converges and combines to form a color image. In addition to the three-piece LCOS optical engine, in addition to the three panels, combined with multiple splitting and combining systems, the volume is larger and the cost is higher. However, due to the high optical efficiency and high image quality The characteristics of it are mainly for the development of high-end professional uses such as large screens.

The following figure is the principle diagram of LCOS optical machine: 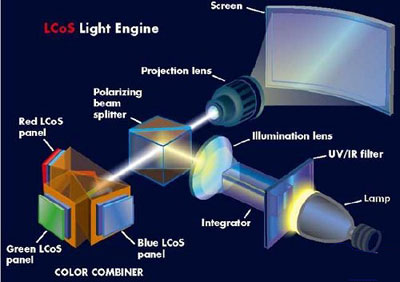 As shown in the above figure is the LCOS projection structure system, using UHP (cold light source lamp) as the light source, using parabolic reflectors to filter ultraviolet light and infrared light, and then using cold reflectors to filter infrared light, through the focusing lens and the compound eye lens to obtain uniform parallel The light is then split by a dichroic mirror, and then polarized light is obtained through PBS, synthesized by reflection from the LCOS chip, and projected onto the screen through a zoom lens to form an image.

The process of displaying signals by optomechanics: Connect the display and signals (including video signals, computer signals, etc.) to the LCOS optomechanical motherboard through a cable. The motherboard converts the signals into electronic signals, and then adds the electronic signals to the LCOS chip. On the drive board, the signal is converted into a digital signal by the board, and the digital signal is added to the LCOS chip through the LCOS drive board, and the signal is added to the optical machine beam by the LCOS chip, and the image is formed by the PBS, the light combining system and the imaging lens Projected on the screen, that is, the image we see.

The single-chip Color Wheel optical engine uses the fast-rotating ColorSwitch to form white light into sequential red, blue, and green lights. The three primary colors and the red, blue, and green screens generated by the driver are synchronized to form a color-separated image. Due to the persistence of the human eye's vision, a colorful projection screen is finally produced in the human brain.

The biggest advantage of the monolithic type is that because the number of panels is only one, and the system architecture of splitting and combining light is relatively simple, it is more competitive in cost and the space of the optical engine is relatively small. However, at present, there are some technical difficulties. In terms of Color Wheel, the polarized white light source is only 1/3 of the previous one, and the brightness is significantly reduced. In addition, because the LCOS panel has to be fast in red, blue and green pictures The composite image is switched, so the response speed of the panel is more demanding, which makes the difficulty of production increase.

The development characteristics of the LCOS reflective liquid crystal display range in color is far higher than the three-shot (CRT) projector and other display technologies, and will almost be close to the NTSC color reproduction standard. Therefore, the high color saturation of the overall picture can be presented, so that the colors are colorful and full.

There are three LCOS chips in the optical machine, each of which has about 1.5 million pixels, and three of them are synchronized to form R, G, and B monochrome images. RGB three-color images are combined into a 24-bit (16777216-color) true color image by optical components, and then enlarged to the screen by a high-resolution wide-angle lens. The display of LCOS silicon crystal TV is more accurate and realistic, and the ultra-high brightness makes the picture performance even better.

The LCOS optical engine has the advantage of low cost because of the simple parts of the product. Coupled with the large investment of domestic manufacturers, compared with the LCD panel supplied by Epson, Sony, and the DLP panel exclusively supplied by TI, LCOS has The trend of rapid cost reduction.