What are the purposes of Googleâ€™s large-scale acquisition of the robot industry mergers and acquisitions at home and abroad?

In 2013, China surpassed Japan to become the world's largest industrial robot consumer market, accounting for 20.5% of global sales; in 2014, China's market sales reached 56,000 units, a year-on-year increase of 54%, accounting for about a quarter of the world; in 2015, The sales volume in the Chinese market exceeded 75,000 units, a year-on-year increase of 36.6%. One out of every three robots sold in the world was sold to China.

In recent years, not only the demand, but also the development of the global robot industry, especially the investment and mergers and acquisitions of the robot industry chain, has been more enthusiastic. China, the United States, Japan and other countries have invested a large amount of real money and silver, and carried out various forms of cooperation to promote the development of these robotics.

The company signed an investment cooperation agreement with Ningbo Verdes Keller on January 15, 2014, and has paid a performance bond of 8 million yuan to it. The company has the right to participate in the stock.

In view of the fact that Ningbo Verdes Keller has not yet fully achieved its production in 2015, its net profit for 2015 has not reached the agreed profit, but the company is optimistic about the development of the robot industry and the prospects of Ningbo Verdes Keller technology and talents. During the negotiation, the company and Ningbo Verdes Keller signed the â€œEquity Investment Agreementâ€ on January 15, 2016, with a shareholding of 2%, which was followed by the performance of the target company.

â€”â€”Superstar Technology is a national robot

Superstar Technology announced on the evening of October 14, 2014 that the company and the shareholder of Hangzhou Weiming Investment Management Co., Ltd., a subsidiary of Zhejiang Guozi Robotics Co., Ltd. (hereinafter referred to as â€œNational Robotâ€), signed on October 13, 2014. In the form of â€œZhejiang Guozi Robot Technology Co., Ltd. Capital Increase Agreementâ€, the company invested RMB 41.419 million in cash in the form of capital increase and shareholding, adding 9.7 million yuan of registered capital, accounting for 26.94% of the registered capital.

Superstar Technology said that the capital increase from the robot has laid a good foundation for the company to transform and upgrade the intelligent and automation fields. It also conforms to the company's development strategy and development direction, and will have a positive impact on the company's sustainable development.

Hangzhou Juxing Technology Co., Ltd. is a professional enterprise engaged in the development, production and sales of medium and high-end hand tools, power tools and other tool hardware products. It is one of the largest, highest technology and most channel leading enterprises in the domestic tool hardware industry. It is also the largest hand tool company in Asia and the top six in the world. In the first half of 2014, companies began to intervene in the robot automation business.

Yawei Co., Ltd. announced on the evening of June 23, 2014 that in order to accelerate the pace of entering the industrial robot business, the company will use part of the super-raised funds to cooperate with German Reis company in robot business joint venture and technology licensing. On June 24, the company will formally sign the "Joint Venture Agreement", the technology licensing master agreement and the package agreement in Yangzhou, China and the German Muse Machinery Manufacturing Company ("Reis"). The name of the joint venture company is "Yaweiwei". Robot Manufacturing (Jiangsu) Co., Ltd.".

In addition to manufacturing and selling a full range of licensed linear robots and horizontal multi-joint robots, the joint venture company will develop, manufacture and sell other robot products according to market demand, including the development and production of various specialized robot technology products required for Yawei's machine tool automation production line. According to the agreement, the joint venture company produces linear robots and horizontal articulated robots for the Asian market. The sellers are KUKA Robot (Shanghai) Co., Ltd. ("Kuka China"), Muse Robot (Kunshan) Co., Ltd. ("Reis China"), and Yawei.

Yawei shares said that the joint venture and technology licensing cooperation with Reis, a company controlled by Kuka, the world's top robot manufacturer, marks the official entry of Yawei into the robot business. The application of propulsion robots in the field of forming machine tool automation will accelerate the pace of transformation and upgrading of Yawei's main business.

On December 16, 2014, Kangli Elevator Co., Ltd. and Beijing Ziguang Youlan Robot Technology Co., Ltd. signed the â€œIncrease Agreementâ€ and â€œEquity Transfer Agreementâ€. Kangli Elevator plans to invest RMB 53.30 million in cash to participate in the equity transfer. Ziguang Youlan, of which 40 million yuan was used to increase the capital of Ziguangyoulan, and 13.3 million yuan was used to transfer the amount of Ziguangyoulan held by Ziguang Co., Ltd. to 142.85 million yuan. After the completion of the capital increase transfer, the company holds a 40% stake in Ziguang Youlan, and Ziguang Youlan will become Beijing Kangli Youlan Robot Technology Co., Ltd.

Although Ziguang Youlan is not profitable for the time being, Kangli Elevator values â€‹â€‹the development prospects of the intelligent robot industry.

If its 2016 performance commitment is realized, Kangli Elevator promises to acquire the remaining equity of the company based on the net profit value of the year at a price-to-earnings ratio of no more than 17 times; if Ziguang Youlan achieved a net profit of less than RMB 10 million in 2016, It promised to repurchase Kangli Elevator to hold the entire shareholding of Ziguang Youlan, and to pay the company an interest of 8% per annum.

Huazhong CNC announced on the evening of September 2, 2015 that the company intends to purchase 100% of the shares of Jiangsu Jinming Industrial Robot Automation Co., Ltd. held by the six counterparties, including Zhang Ying and Wen Bi, by issuing shares and paying cash. The transaction consideration is 280 million yuan. The company intends to issue matching funds to no more than five other eligible investors, and the total supporting funds shall not exceed RMB 125 million. The issue price of the assets purchased for the issuance of shares was adjusted to 26.36 yuan / share.

After the completion of the merger and acquisition, Huazhong CNC and Jiangsu Jinming will achieve better synergy in operation management, technology, capital and platform to achieve market complementarity.

On June 13, Ioos issued a plan for the increase. The company plans to acquire 70% of the shares of Shanghai Songsheng Robot System Co., Ltd. held by Liu Xiaojun, Li Qiang and Guo Yijia by issuing shares and paying cash. The transaction price is 52.5 million yuan. 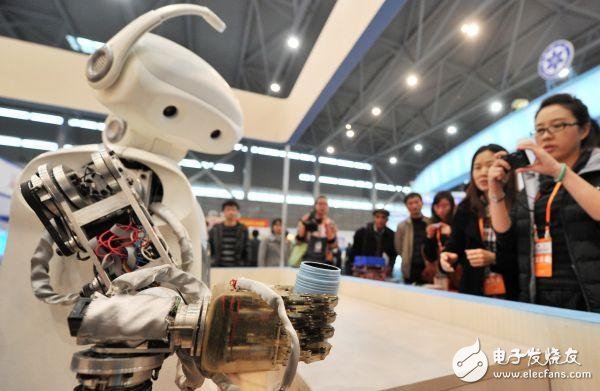 The enterprise library shows that Ios is a leading domestic manufacturer integrating R&D, manufacturing and sales of logistics and warehousing equipment and solutions. Its brand is loved by global users and obtained the qualified supplier qualification of CNNC in 2014. The company specializes in the design, manufacture and sale of light handling vehicles and electric storage vehicles. The main product lines include manual and electric pallet trucks, manual and electric stackers, platform trucks, aerial work platforms and other peripheral industrial equipment.

Ios said that Songsheng Robot has rich experience in the field of robot system integration and can solve warehousing logistics. The application requirements of robots in many industries such as automobile manufacturing and photovoltaic production will help the two parties achieve synergy in the field of intelligent warehousing, further provide technical prerequisites for expanding other businesses in the field of industrial intelligence, and create new profits for the company. growth point.

Feyvan electronics wires and cables are used to industrial and automotive field including home appliance, sensor, motor, rotary encoder, automotive wiring assemblies etc. For the purpose of providing excellent service, our engineers and design specialists devote to help you choose and design standard or custom wire and cable to your unique application.

The cables are available in a wide variety of configurations and features. Conductors include annealed stranded tinned copper wire or bare copper. Insulations include PVC, Silicone Rubber, XLPE, Teflon and etc., all of which are RoHS, REACH, UL and CSA compliant. We have complete production lines to satisfy customers' needs.